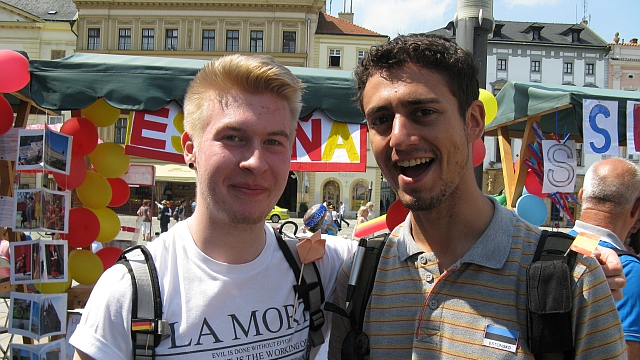 Since the 8th of May is a National Holiday in the Czech Republic I made the most of it to visit the Italian volunteer Mafalda in Olomouc. Of course, it has not only been Mafalda and me but also some others from the Kettle-Volunteers. Apart from finally meeting together in beautiful Olomouc – honestly, I think it is one of the greatest cities I have seen in the Czech Republic so far – another reason was the Europe Day the on the 9th.

But first one more thing about the holiday. I realized that on every tram I had seen in the morning there is a little Czech flag fixed in the front. I liked it because it made you know the special day if you didn’t already know. Nevertheless, this was only in Prague, no flags in Olomouc for whatever reason.

So because of this holiday I was almost about to miss my train that morning, of course.
But I arrived in Olomouc according to plan where I met Mafalda, Myléne and their new volunteer in Svycarna, Mari from Georgia. Together with the other two Germans, Klara and her friend Samyra, we got to Mafalda’s place which is located in a lovely area and very nice itself, to deposit our luggage before we went to “The Crack”, an Irish pub- lokking restaurant with Vietnamese food, unexpected combination.

Afterwards we explored the beautiful centre of Olomouc and in the afternoon we met with the German delegation of United Games of Nations which is also the organization of Mafalda and responsible for the Europe Day in Olomouc. Together we had been to the amazing park surrounded by the city wall and a little stream, music from the Majáles festival and the wonderful colours of spring. After a nice dinner the Europe Day could come. Yet to mention 4 of us shared one bed together.

The weather next day was just perfect. The two Germans left to the main station early in the morning together with Mafalda who had to be earlier on the square where the little festival took place. So we could sleep longer, enjoy the nice morning and have a coffee in a little café.

But then the action started. Mainly, every nation had its own stand on the square next to a big stage. Mafalda was responsible to present every nation combined with little performances typically for every country on the stage. But sometimes it didn’t really fit, like there was a Flamenco dance for the Netherlands for example. But in the end it was still amusing. So our part was to support Mafalda a bit by presenting our own countries, having a little EVS-stand and giving an interview about EVS on the stage.

The day was coming to its end and together we finished off in an Italian restaurant, where else? Olomouc was a great experience, the city itself is – as I already said – just wonderful.
And with a nice weather and nice people around it is even much better.
And when I was standing at the main station a man who was from Belgium spoke to me because he recognized me from the festival and expressed his pleasure and joy about what we do there.
What could be better than having confirmation of someone that what you do is a good thing.
Next stop Velké Losiny.