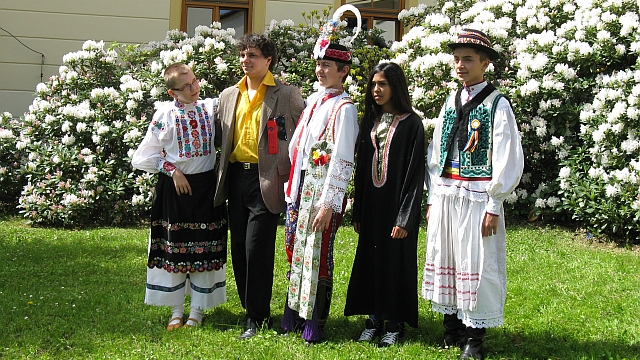 Straight from Olomouc I headed to Velké Losiny, a small town in the North of Moravia, for the Little Singer contest Spěváček by the Folklore organization Folklorní Sdružení České Republiky which is also a member of ČRDM.

On the way to Šumperk which is the next bigger city where I got picked up, I had a quite funny moment in the train. It turned out that I catched a train using a longer distance of 2 km so I had to pay only 1 more crown! I wouldn’t have believed it would be possible someone could be so meticulous about such a matter here in the Czech Republic. I felt like back in Germany.
I arrived in the evening, attended the staff meeting in one of the 4 hotels for the whole activity before I was brought to my own hotel. It was already dark but when I looked outside I could feel the presence of the nature and the mountains around so I was excited about the view in the morning.
And I was right. The view was just breathtaking, very nice with a nice weather as well.

First we went to the základní škola (basic school) in Velké Losiny and the guest singers from Israel, Romania, Slovakia and the winner from the last competition sang in front of the pupils. Afterwards it was my turn again and together with Ondra from FoS ČR I talked about my year, or to be exact, my 9 months of doing EVS in the Czech Republic. Maybe I encouraged any of them to go for EVS.

After lunch the foreigners guests, included me, had a meeting with the mayor in the town hall. But the best of the day was still to come. In the evening should be the concert of the Brněnský rozhlasový orchestr lidových nástrojů (BROLN) in the Termální Lázně Losiny.

It was amazing, very nice music and singing and also some traditional instruments as bagpipes but not like the Scottish ones because instead of blowing the sack is stuck between the arm and the body and pressed together and in the back the sound comes out of a horn.

After that nice concert the next day started with a visit in the Handmade Paper museum Velké Losiny, that’s what the town is very popular for. I even made a certificate which proves that I worked with handmade paper, nice!
In the afternoon the semi-final of the competition started. It was great to see the high level of the little singers, sometimes as good as the musicians of BROLN.
But the music never stops, of course. In the evening we had a lot of dance and music in the hotel and the atmosphere was perfect, all the children and adults dancing, singing and having fun together.

The great day of the final. But first we visited the castle. And this was a real castle. I mean, you can find many castles but the atmosphere is often similar. But there you could feel the past, and smell it.
So the final began and after a 20 singers I really didn’t want to make the decision. Everyone was really good and hard to say who should be the winner but in the end a boy with a high tenor and just that bagpipes won the competition. Congratulations.

I’m really glad I have been part of Spěváček and one more important thing: to have improved my Czech. I can proudly say to be able already talking to people in Czech. Let’s see when it will be time for my first article in Czech.