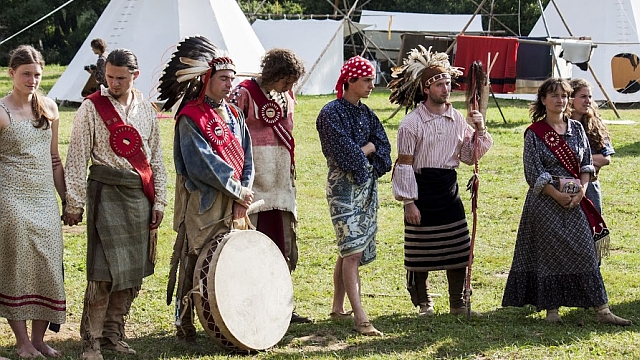 It is already more than a month ago that I have been to the first of two summer camps in the Czech Republic in July…,

Summer time in Česko is summer camp time. Almost every youth association but also the youth centres and kindergartens are organizing camps for children and youth all over the country. Of course, I could not miss to attend them as well since my organization is the National Youth Council.

Nevertheless, my first tábor (camp) differed from most of the other summer camps. It was from the Czech Woodcraft League, Liga Lesní moudrosti, which I already got to know in April in Michalovy Hory – you can find the article in the archives.

So why was it different to the normal ones? First, we were sleeping in real Native American Tipis. As you can guess now it was an Indian summer camp following their traditions and rules in an open way.

When I arrived to the camp which was in the region around Mariánské Lázně, I arrived to an open square surrounded by the forest and a stream; I faced maybe 2 dozens of tents at first. I was wandering across the place, many eyes looking at me, which was mainly because I was a stranger, above all since I was not wearing Indian dress.

Everything was natural, making the fire or washing dishes in the stream, a welcome change.

Now and then I helped with some little work, for example digging a hole for the toilet or chopping the wood but anyway I was more like a guest so I could spend most of the time with so many nice men, children, youth and adults. As you can see it was not like a typical summer camp only for children but that’s why it was so special. Summer camps often have a strict programme, above all the ones from the Scouts I would say, whereas the Woodcraft camp was a whole free activity. Of course, there was a program, too, but it seemed to be more convenient. It means we had a lot of time to swim in the cold stream, play Ringo, Lacrosse or other games or just sit around the fire in the early evening. Since there were many little children the bed rest was always a bit earlier.

One thing I had already done was the sweat lodge so I was excited that it took place one evening.

There have been so many unique impressions as the whole camp is unique itself, they said maybe even the biggest one of its kind one in the world. That might be the reason why I decided to come back next year on my holidays.