Malte: Workshops in Brno and Adamov 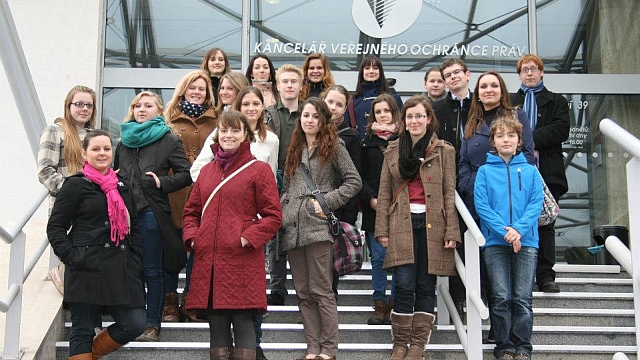 It turned out that the Kettle-Volunteers can’t resist being together as often as possible. Therefore we reunited the weekend before last in beautifully located Adamov u Brna at the Ecological Leisure Centre Švýcarna. I’ll have more on this subject later.

So what’s the Kettle Kingdom actually all about?
When we have been to our On-Arrival Training we found a room only with a kettle on a table and we decided to choose the kettle as the fixed point, the central organ of our EVS (Just in a joking way, of course. Nevertheless, it was big fun.).

Unfortunately, I could not join our reunion from the very beginning but I still had another great time in a school in Brno. You read right. In a school. As if this wasn’t enough we also lived there and slept in a classroom. In the end it sounds worse than it really was.
I have had the opportunity to join a weekend activity by the National Youth Council which included discussions about political issues but also some dance workshops. Essentially, I attended most of the Kecejme do toho – Structured Dialogue of Youth workshops which is also a project of ČRDM.

It was very good to meet many youngsters who are so enthusiastic about different topics and to see how much they already know, for example about political problems. Furthermore, I was the only one not being Czech so it has also been a big opportunity to use and improve the language which has become quite good, yet. I tried to talk to everyone and participate actively in all workshops. This matter appeared to be very difficult since everything was in Czech. Therefore, sometimes I felt pretty lost which is the only negative aspect of the whole event.

Saturday afternoon. Heading towards the reunion. But first I had to search for the key of the main door since the doors were locked for the whole time even during the day. Strange.
At the main station I found out there’s no train going to Adamov but a bus and I was lucky I arrived much earlier, otherwise I would have missed this bus. The bus journey to Adamov was interesting. Bus drivers who listen to Techno and cars overtaking police cars. I seriously love this country. In Adamov, Kela – another volunteer who also came later to the workshop – was already waiting. Together we hit the road for an one-hour walk to EVC Švýcarna. The whole time we tried to hitch-hike and after more than half of the route a nice guy gave us a lift for the last about 0.5 km. At least we did it.

It was so nice to see all the other volunteers again. Unfortunately, not everyone could make it there but we still were many people, also some other volunteers and a sweet dog called Jahoda (Strawberry) who set stones in motion to let them fall into the stream, very funny to look at.
Kela and me arrived just when all the work on the place was already done for that day. So we could enjoy our time in the little bar with all the other volunteers before Francesco who invited us to this event finally introduced us to the lovely and passionate Italian cooking.
Together we created probably the best Tomato Sauce, Parmigiana, Pasta, Pizza. We couldn’t be grateful enough to Fran for this awesome taste of love and passion.

At last, we spent the rest of the evening with some pints and Italian “Taranta” dance before we had little work to do on the courtyard the next day. Before we set out on our march back to Adamov we all together visited a nice and dark cave next to the Centre. After that nice experience we started walking towards the train station. Coming closer to Adamov we noticed that we left too late so we almost missed our train. But in the end all of us made it.
On the train to Praha I couldn’t use my phone since the SIM card has been locked on the way to Brno and, of course I forgot the password and I didn’t have anything to read so finally I could use the time for a little nap or just to let the events go through my mind while watching the landscape drifting past.